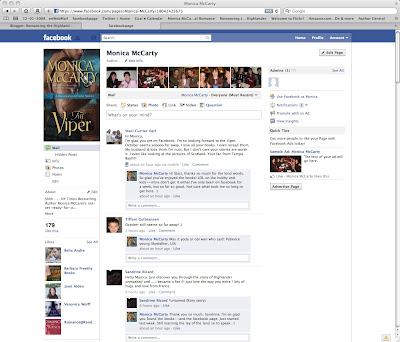 I just wanted to thank everyone for all the support last week in getting my Facebook Page off the ground. I have to admit it was much easier than I thought it would be. I was going to hold off on doing Twitter for a while but decided it was probably better to do them both at the same time. So now I'm on BOTH Twitter and Facebook, LOL. That's me, living on the edge.

I think I missed the point about social networking. I wanted to do a "dip a toe in the water" kind of thing, but word gets out fast. :) The idea was to work out the kinks before the book launch when I send out my newsletter and not put it on my website until then, but I might re-evaluate. But I still like the idea of taking it really slow. Don't want to do something "wrong" before I learn the ropes.

My initial impressions: Twitter is VERY fast--it felt like it got around very quickly that I was on Twitter (and by extension FB), but FB feels more interactive.

I was going to integrate feeds from both the blog and twitter, but I decided to hold off. I thought about it and wondered if that would make Facebook status items not feel as "fresh" and interactive. Maybe a link works better? Any thoughts from you all would be appreciated.

Along the same lines, I'd love to get your impressions of things you guys think "work" on Facebook. Is it a regular feature? Certain types of status reports? Just shooting the sh*t?

Thanks again for getting the word out and making me feel so welcome. You guys are the best!

Posted by Monica McCarty at 5:59 PM