Contest Opportunity and a quick note. . .

Just wanted to alert you all to an exciting booklovers extravaganza contest taking place over at Samantha James's website. She's giving away hundreds of prizes over the next month from twelve fabulous authors (including yours truly :)) starting day 1! So make sure to pop on over there for your chance to win a set of signed coverflats from my MacLeod trilogy!

I hope everyone had a wonderful Easter and/or Spring Break. My kids have something called "ski week" in mid-February, so unfortunately our break isn't for a few weeks. I am, however, taking a mini-vacation this week to attend a writer's conference in NY, so I thought I'd leave you with a fun clip. My mom is a big old movie buff so I grew up watching all the old musicals. What's fun is how much my kids enjoy them (especially Sound of Music and Hello Dolly). Me? Seven Brides for Seven Brothers and Oklahoma.

What about you . . . what's your favorite old musical?
Posted by Monica McCarty at 4:38 PM 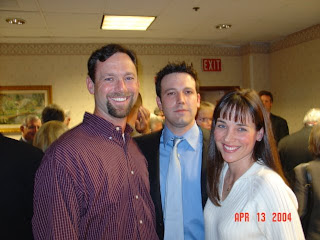 Couldn’t resist the picture—it’s from a Red Sox event in 2004
Last night we watched a great movie from Netflix called GONE BABY GONE. It stars Casey Affleck and is Ben Affleck’s directorial debut (thus the picture!). We’ve been struggling with the movie rentals lately (scraping the bottom of the barrel because of the writer’s strike) and we really enjoyed this one. The story takes place in Boston and Ben really brings the city to life—almost as if it’s a character in the movie. Kind of like the Highlands in a good Scottish historical romance, right? But I digress . . .
One of the things I really loved about the movie was that Patrick, the Casey Affleck character, faces a big moral dilemma at the end. One of those situations where there is no easy answer—the kind of thing that makes for good “water cooler” discussions at work.
Ironically, the weekend before we’d watched another one of these type of situations on 60 Minutes. I’m greatly simplifying, but in that case a man had been sentenced to life in prison for murder. Turns out, during the trial many year ago, ANOTHER man had confessed to his attorneys that he’d actually committed the crime. The moral dilemma in that one was that these attorneys could not tell anyone what they knew because of attorney client confidentiality. Eventually the real murderer died and before he did one of the attorneys had him sign a waiver allowing him to tell what they knew. It looks like it will probably be enough to get the man who was wrongly convicted freed.
So essentially—no matter how badly they wanted to tell—these two lawyers had to sit by and watch an innocent man serve years (I think it was well over twenty) for a crime he didn’t commit.This is the kind of questions law professors love to give on ethics exams. Although every instinct is to want to tell what you know, as a lawyer you owe a duty to your client (in this case the guy who admitted the murder). The ethics code/laws are very clear—even the innocent man’s attorney acknowledge there was nothing the other attorneys could do.
These kind of things not only make for great water cooler conversations and law exams, but they can also be great sources of conflict in novels. I love when a character is faced with difficult choices and the “right” answer isn’t always the one that is easy. Or better yet, where there is no clear right answer. Of course it’s a little harder to do in a romance where ambiguous endings aren’t so good. LOL.
I’m in the planning stages for book #3 of the next trilogy and all these fun kind of questions are on my mind. And yes, that means I “finished” the first draft of book #2—I’m waiting for my fabulous CPs suggestions (Jami Alden and Bella Andre) before I send it off to my editor.
Do you love these kind of situations like I do or do you prefer a more clear cut answer? Any movie that you can think of that has a good moral dilemma?
Posted by Monica McCarty at 6:30 PM

I thought it would be fun to see what everyone's favorite Highlander movie is. Here are my top three. There are a few others I could have included (Brigadoon, The Master of Ballantrae, and Mary of Scotland), but I thought these all had the same feel. Any I missed? 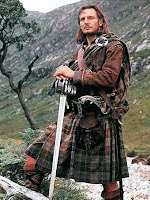 Posted by Monica McCarty at 3:21 PM