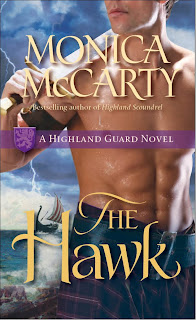 New Cover Alert!
I was going to hold off on the grand unveiling until THE CHIEF hit stores, but since the cover is already up on Amazon, I figured I better not wait!
So . . . ta-da! Here it is, the cover for book #2 of the Highland Guard series, THE HAWK. The hero is Erik MacSorley, the best seafarer and swimmer in the Highlands (basically, he's my Navy SEAL). I'll be posting a blurb on my website soon.
I'm thrilled with how it turned out. Strapping lad in plaid, sword, cool lion rampant emblem, ship in the background . . . perfect!
But I do want to know how they keep coming up with different poses! LOL.
What do you think?
Posted by Monica McCarty at 12:10 PM 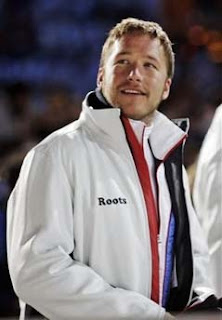 Olympic Fever
Are you guys as caught up as I am in the Olympics? I *love* the winter olympics--especially the skiing and skating. My favorite events are the moguls and ice-dancing, but really just about any skiing or skating event will have me glued to the TV. I was thrilled to see Bode get the bronze yesterday, and very exciting to see the women's moguls have two American finalists. I even turn into a snowboarding fan around the Olympics, LOL.
My one complaint: the delayed and extremely LATE coverage of the main events. I really don't get it. Why can't NBC start at 6 or 7 and end by 11. Last night the skating didn't end until midnight!
What about you...are you watching the Olympics? What are your favorite events? Are you a summer or winter fan?
Posted by Monica McCarty at 3:48 PM

Too Much Reality
Last night my husband and I were watching one of our guilty pleasure shows, the Millionaire Matchmaker. Patti just cracks me up. But I have to say last night's episode really bothered me.
Here's the summary, but you can get the gist from the video. Patti (the Matchmaker) brought a woman millionaire back from last season to try again. Shauna is a 42 year old (same age as me, BTW) millionaire business woman (I think she owns hair salons) who likes to date younger men. Cougar is a frequently used term on the show. I usually don't like the term, but Shauna fits. Patti tried to get her to date older guys last season, but Shauna of the too-much-botox wouldn't do it. She was back this season to allegedly give it a try after dating a younger guy who wanted her to pay for everything (shocking!). Personally, I don't get the younger guy thing. A couple of years on either side works for me--although I'd make an exception for Alexander Skaarsgard.
So in last night's episode Patti gives Shauna some older (and younger) guys to choose from. Shauna eventually picks a fifty plus year old guy who was INCREDIBLY good looking. Very rugged masculine type with chiseled face. My husband and I both thought he was way too good for the unappealing Shauna. The guy arrives at the hotel to pick her up for her date, after sending her a gorgeous dress (that she made fun of), and arriving in a limo to take her to Spago. What does Shauna do? She takes one look at him and goes running back into the hotel, screaming like a madwoman that she won't date someone who looks like her grandfather.
I was appalled. This is where reality TV really bothers me. I didn't need to see that. It was beyond cruel to the guy and utterly unwarranted. We were forced to watch the poor guy eat alone at Spago while he wondered what the heck had happened. It was VERY uncomfortable. Shauna would have been lucky to go out with this guy, I hope he finds someone wonderful soon. I guess I think the show went a little too far. Kind of like when the TV crews stick the camera in the face of some guy who just lost a big game and is really emotional. I don't need to see it.
If you can't watch the video the show shots are here.
I don't watch nearly as much reality TV as I used to, and I think this is why. Now that the newness of reality shows has worn off, the producers are looking for ways to push the envelope and don't seem to know where to draw the line.
So what about you. Do you still watch reality TV? Have you had an experience like mine where you get a little disgusted with the show for going too far?
Posted by Monica McCarty at 11:38 AM