This wouldn't be much of a Highlander blog without a regular Scottish feature, would it? So I've decided to start a new list on the side bar of "My Favorite Things Scottish." And who better than to top that list than Gerard Butler. I think I've seen almost all of his movies now and my two favorites are: Timeline (I don't care what the critics say) and 300.

For those of you who haven't seen the movie, here's a funny 300 video poking a little fun at the plethora of beefcake.

Also, I'll be taking a break for a few weeks for famiy vacations and the RWA conference, but I'll be back on July 15th with some fun conference and vactation updates.

Happy 4th of July!
Posted by Monica McCarty at 8:17 PM

The Summer of Love 40 Years later

Today I'm blogging over at the Divas about the enduring legacy of the Summer of Love--its music. Make sure to check it out. Here's a video to get you in the mood...

Enjoy!
Posted by Monica McCarty at 5:00 AM 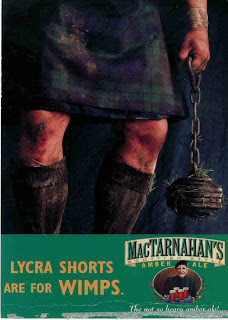 I think this about sums it up, don't you? Strong, tough, gritty, undeniably alpha--these are the kind of heroes I write about.
My husband actually has this t-shirt. We bought it at the Highland Games in Pleasanton a few years back--great beer and great advertisement. Wish I'd thought of it.
Posted by Monica McCarty at 10:49 AM

Another Great BBC Production
In my never ending love affair with the BBC (and its costume dramas in particular), I've added a new feature to my blog. In the right column below the book links you will see a list of "Recommended BBC productions" in rough order.
My favorite BBC miniseries of all time (and if you looked at the "my favorite" section of my website you'll see that its my favorite movie of all time) is the joint A&E production of Pride & Prejudice, followed closely by Elizaeth Gaskell's North &South and Almost Strangers. I'm fortunate enough to get BBCAmerica, but all of these are also available on DVD.
Which brings up another favorite topic: two of the greatest inventions in the "make my life easier" category: Netflix and Tivo. (You'll probably hear my wax poetic about both of these things from time to time). It is thanks to both of these products that I've been able to watch so many of these great shows.
Last night we watched the first episode of another great production (OK technically an HTV production): Robin of Sherwood. Once you can get past the 80's haircuts (my husband dubbed him Robin of Journeywood) it's fantastic--much grittier and more mystical than we are used to seeing. I'm looking forward to watching the rest.
Posted by Monica McCarty at 9:14 AM

Today I'm blogging about author websites over at the Divas, so come on over and check it out. I'd love to hear what you think are the most important things to have on a website.
Posted by Monica McCarty at 11:29 AM

Only one more episode. Sigh. It's hard to believe after eight years there will be no more Tony Soprano.
Is the Sopranos the best tv show of all time? I don't know, but it certainly would be in my top five. Much has been written about what makes it so spectacular, and I won't try to summarize it here, but the one thing that has always fascinated me as a writer is the appeal of the anti-hero. How is it possible that I could relate--and at times sympathize--with someone as morally corrupt as Tony Soprano?
Therein lies the brilliance of the writing, particularly in characterization.
Tony is the quintessential "anti-hero." According to Wikipedia an antihero is defined as: An anti-hero in fictional works will typically take a leading role, performing acts which might be deemed "heroic" (at least in scale and daring), but using methods, manners, or intentions that may not be so - indeed they are often underhanded or deceitful.
As the head of his family, Tony is the heroic "alpha" male: the tough, take-charge leader with a strict sense of duty and responsibility. As Tony himself said: "All due respect, you got no fucking idea what it's like to be number one. Every decision you make affects every facet of every other fucking thing. It's too much to deal with almost. And in the end you're completely alone with it."
But he is also a vicious, cold-blooded murderer who compulsively cheats on his wife. The "anti" part of the equation and qualities that I don't usually find compelling in a hero. :) This odd duality was brought succinctly to a point in a recent episode when a rival wiseguy threatened Tony's daughter at a restaurant. As viewers we could all sympathise with the fear of what Tony must have felt to have his daughter threatened. What did Tony do? What any hero would do and took care of it--in this case by beating the guy up. But he did it with such brutality and violence that there was no hiding from fact that Tony is not, and can never be, a hero.
But I'm going to miss him.
Posted by Monica McCarty at 10:50 PM