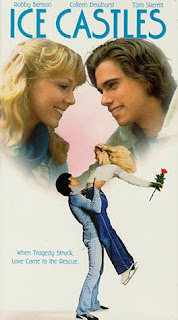 Old Favorites
There's just something about ice skating. It's one of those sports that is "cool" around the Olympics, but forgotten at other times. My husband groaned last week when I put the nationals on the TV, but soon he was just as involved as I was. Our kids were watching it as well and I happened to mention what I think is the quintessential skating movie, ICE CASTLES, and was appalled that my husbsand had never seen it.
Netflix to the rescue! We watched it last night with my 8 year old daughter and I was thrilled with how well it held up. I used to have the biggest crush on Robby Benson. So here's the shocking part: it's 30 years old and Robby Benson is now over 50. Sigh.
It got me thinking about favorite childhood/young adult movies. Who (in the 40 year old range) can forget BLUE LAGOON and LITTLE DARLINGS? My other big favorite was THE OUTSIDERS. I was a huge Matt Dillon fan and there was a small movie called OVER THE EDGE that I must have watched 100 times (kind of scary given the subject matter!).
What about you . . . any movies that hold a special place in your heart?
Posted by Monica McCarty at 2:37 PM