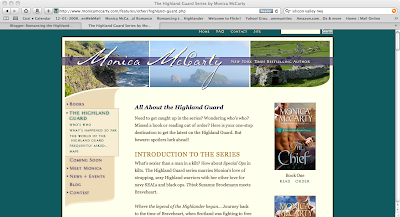 The Plan
Recently, I put a new section up on my website called "All About the Highland Guard." If you missed a book, are new to the series, or just want a refresher before the next book comes out, it's the one-stop destination to find out what's been going on. I'll be updating it soon, but in the FAQs section, I answer (kind of :)) the most common question I get from readers: basically a variation of who's next or when is [blank's] story. You can read my answer here, but I thought I'd give a little more explanation of why I'm REALLY not trying to torture you. (Ing, this means you, LOL!) There is a plan . . .
I conceived the series to be between 10-12 books. If I get to write them all (I hope!), most but not all of the guys will have a story, however, there are some twists and turns along the way.
The series spans the period from 1305-1314, basically from the time Braveheart dies to the Battle of Bannockburn (the battle where Bruce definitively beats the English).
To do a big series like this, I needed to plan out the order of the books beforehand. I usually don't discuss the writer's process because I'm not sure readers are really all that interested in the nuts and bolts. But here it's relevant. I broke the period up into key events to give each story its own backdrop and to make sure it ended on a high note (i.e. The Chief ends with Bruce getting the crown, The Hawk ends with Bruce retaking his crown and Edward dying, and The Ranger ends with the big victory agains the MacDougalls). Then I tried to match up what was happening in that period with the hero whose skills would be the most useful. It was a little bit like working out a big puzzle, but most of them were pretty obvious (i.e. when Bruce is forced to take refuge in the Western Isles, it had to be my seafarer/navy seal--Hawk; when I read about a scout who warns Bruce about the ambush at Brander, I knew it had to be my scout, etc). From there, I came up with a very basic possible story line for each book, knowing I would possibly need to set things up in early books.
The point is that the order of the books and the hero have been set from the beginning and are determined by what is going on historically. So even if I know readers really want x's story, I can't write it out of order or the series would be jumping all over the place. This isn't to say that a certain book isn't on it's way--cough cough--but more to give a little insight into the order of things. :) In other words, there is method to the madness!
Planning and keeping track of all the characters and plot lines in a big series is a big undertaking and very different process from writing a trilogy. The initial document I had was over 50 pages single spaced. Now, it's hundreds of pages. But not long after I decided to write the series, I discovered an amazing writing software program that I was able to adapt to use as a series organizer. For those of you who are writers out there, SCRIVENER has been an amazing tool (right now only for macs, but soon for pcs). I wrote the developers about how I was using it, and they loved the idea so much they did a big interview with me, complete with pictures. If you are interested it's here.
My writing friend and I, Tracy Grant are going to be giving a talk to the Silicon Valley Romance Writer's Group in May on writing series. If any of you are local, you can find out more info here.
Having said all that, I hope to have some news soon as to what's next! My publisher is finalizing the schedule as we speak. Stay tuned . . .
Series are wildly popular right now. Every time I open up the latest issue of Romantic Times, it seems like the "series wrap-up" section is getting longer and longer. Of course, that makes me worry about reader burnout. I enjoy series in romance, as long as there is a happy ending for the main couple. In other words, I don't enjoy single character series as much (in romance at least). My favorites? Loved Julia Quinn's Bridgertons, Suzanne Brockmann's SEALs, Cindy Gerard's Black Ops, Tara Janzen's Steele Street. Right now, it seems like the biggest series right now are Paranormal and "small town" stories like Robyn Carr's.
What about you . . . do you like series? Are you getting series burnout? What are your favorite series right now (other than a certain Highland series, LOL)?
Posted by Monica McCarty at 5:31 PM