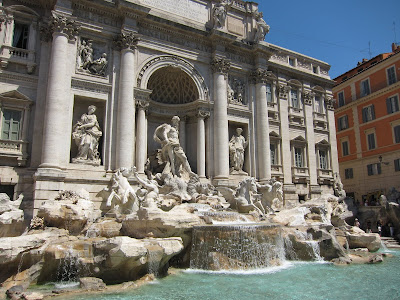 Guess Where I was?
Yep, Rome (that's Trevi Fountain pictured) among other places. I know I mentioned it would be quiet around here, but I didn't want to broadcast exactly why. The McCarty family took a long planned vacation a little early this summer. We went on a Disney Cruise to the Mediterranean! It was spectacular. We traveled with a friend of mine from law school and her family (as well as Jenny Garth of 90210 fame and her husband Peter Fracinelli from the Twihard movies--no I don't know them, but they were on the ship). We sailed in and out of Barcelona and had 11 nights on board with a stop in Malta, four in Italy, and two in France, including Corsica. We were originally supposed to stop in Tunisia, but after the problems Disney changed the port to Sicily. I absolutely fell in love with Italy. Rome was amazing as was the Isle of Capri. I know it sounds cheesy, but Disney really is a great way to go with kids--they had a blast.
We were gone for two weeks, and then I flew directly to RWA so I've been "unplugged" for quite a while. Lots of fun things to tell you about. First off, I mentioned that my friends Jami Alden and Bella Andre and I were going to be on the cover of RT, well it's out! Here's the link: http://www.rtbookreviews.com/ (you can click on the cover to make it bigger). We also did a video. It's about 7 minutes long and talks about how we got together as CPs and why we think it's worked so well. I managed to watch it without cringing too badly. God, I hate watching myself on video.

And finally, I found out THE CHIEF won the historical category of the OCCRWA Book Buyer's Best contest as well as the Top Pick overall (page down) and the Reader's Crown contest for best Long historical. All the books have been doing pretty well on the contest circuit. You can check out all the finals/wins on my website in the "news and reviews" section of each book.
Hope you guys are all off to a great summer and happy Fourth of July!
UPDATE: oops, almost forgot to mention some other exciting news. I came home to a huge package of my very first audio book! I'm often asked if my books are available on audio and now I can say "yes!" THE CHIEF is the first, but I'm hoping there will be more. I have a copy to give away to one commenter. I'll choose a winner on Friday. Usual rules apply.
Posted by Monica McCarty at 5:15 PM