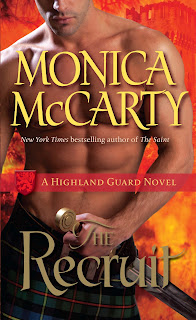 The Cover Gods Strike Once Again!


I was going to wait until my next website update on May 1st to unveil the new cover for THE RECRUIT, but of course, guess what? Yep, Amazon already has it up (I guess Random House has already had it up for 2 weeks!). I mentioned on FB how much I love this cover. I think it's my sexiest yet--and that's saying something! I love the pose, and it really feels like there's movement to it. Oh yea, the abs aren't too shabby either :) So what do you think of Kenneth?
Posted by Monica McCarty at 6:44 PM

How much do you know about your heritage?
One of the benefits of writing about real historical figures is that I receive emails from readers who are related to some of the people/clans I've written about. I've even received emails from Bruce descendants--which is really cool! (I've also had to apologize to a few Comyn and MacDougall descendants, LOL). Sometimes, the books have inspired readers to go digging deeper into the family genealogical charts.
I went through a period, probably around fifteen years ago, when I became really interested in genealogy. My aunt is the resident family historian, and using some of her information I filled out a fairly extensive family tree using Family Tree Maker software. Unfortunately, as that was about 5 computers ago (when floppy discs were still being used), I don't have the info at my fingertips anymore. I do recall that we could trace one of my ancestors back to early 16th C. Sweden. Since I didn't realize I had any Swedish ancestors that was pretty neat. :)
Alas, I was disappointed to find no illustrious relatives. Nor--I'm sure you will be shocked--am I the long lost grand-daughter of a prince, duke or earl. Sadly, I don't think I'll be inheriting any long lost family castles.
I did find out a few things:
--One of my great grandfather's fought in the American Revolution
--Another was a semi-professional baseball player (given that I married a baseball player I thought that was cool)
--My father's Irish ancestors did not come over during the potato famine, rather my ancestor was the younger brother, so when the family farm went to the elder, he took a boat to America.
--My mom's grandmother fled Mexico to get away from Pancho Villa. She made it over the border because she was blonde-haired, blue-eyed and could say "coca-cola." (Passed for American).
My father's mother was Scottish (Ferguson), but I don't know much about where they came from. That's on the list of things to research at some point. Ironically, there was a Ferguson who fought with Bruce and was reported with him when he fled to the Western Isles. I wanted to write about him in THE HAWK, but ran out of page space :)
Are you interested in genealogy? Do you have a resident family historian? How much do you know about your family? Any cool relatives?
Posted by Monica McCarty at 5:13 PM 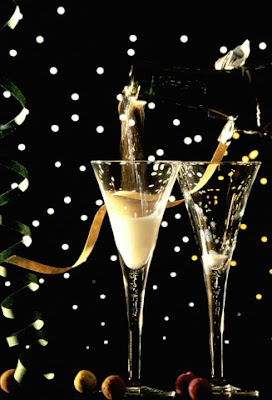 The Saint is a NYT (#23) and USA Today (#72) Bestseller!
I'm cracking open the bubbly tonight--well, actually a Guinness--to celebrate THE SAINT's hitting the bestseller lists! Thank you all so much for your support. It's such a wonderful marker for an author, but it couldn't be done without you guys. So to all of you who have recommended the books to friends, spread the word on review sites or social networking, pre-ordered, ran out and bought a copy right away (or downloaded!), I truly appreciate it. Cheers from me!
Posted by Monica McCarty at 5:22 PM