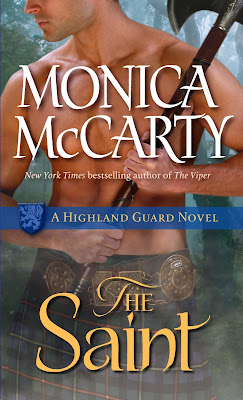 I'm thrilled to be able to say that THE SAINT is now in stores! I hope you guys fall in love with Magnus as much as I did! As always, I love to hear where you see the book if you are out an about. I'm blogging over at Romance at Random today to celebrate the release, stop by if you get a chance.
Posted by Monica McCarty at 8:01 AM 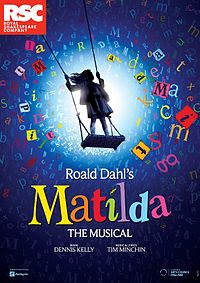 Is there such a thing as too much reading?
One of our inside family jokes to our daughter is taken from the brilliant musical Matilda that we saw in Stratford-upon-Avon in Nov. 2010. Our 12 year old daughter has her nose in a book so often, we ask her why she can't be like a normal kid and watch telly (you can hear part of the song here).
Talk about ironic timing. I was thinking about writing this blog yesterday, and I opened up Yahoo this morning to see that Matilda has been nominated for 10 Oliver awards! We've been talking about it (raving!) since we saw the opening preview shows of the premier two years ago at the RSC. I think I've mentioned it on the blog before. It's the first musical I've ever been to where I hadn't heard any of the songs before, but absolutely fell in love with it. Really brilliant writing. If you've read the book or seen the movie with Danny Devito it's even better. When it crosses the pond to NY next year, I'm sure we won't be alone in my enthusiasm. We feel very fortunate to have caught it when it first opened (literally first few shows).
Anyway, back to reading. I did a poll on FB to see how much you read. I probably average 1-2 hours a day (average--some days will be much longer). Do you think it's possible to read too much?
Posted by Monica McCarty at 9:32 AM

And the Winner is . . .
(Insert drumroll) Sabrina Tyndall! Congratulations to Sabrina, and thank you all for the wonderful posts on the covers. I truly enjoy hearing everyone's favorites, and it's fun to see the love spread around.
Sabrina, to claim your prize please email me ASAP at the contact email on my website: http://www.monicamccarty.com/contact.php with your mailing address.
Posted by Monica McCarty at 5:08 PM 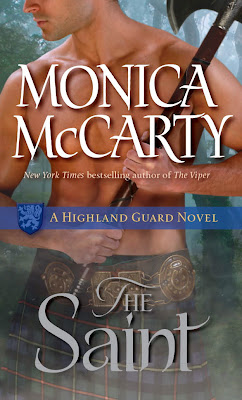 Guess what I have to give away?
Yes, waiting for me when I returned from Tahoe was a beautiful hot-off-the-presses copy of The Saint! I know it's only two weeks until release day, but I thought there might be someone out there who wouldn't mind an early copy? :)
Just tell me this: What is your favorite cover of mine? (Here they all are.)
All the normal contest rules apply (http://www.monicamccarty.com/contest.php#rules). To be eligible to win, you can leave your answer here on the blog, on Facebook, or on Twitter. I want to get it out soon, so you will only have until Wednesday at 5 pm PST. I'll choose a winner Wednesday night and (hopefully) pop it in the mail on Thursday.
THE CONTEST IS NOW CLOSED!
Posted by Monica McCarty at 7:00 AM 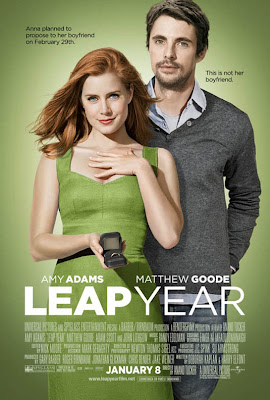 The Difficult Heroine
I mentioned on Facebook that I celebrated "finishing" book #6 of the Highland Guard (The Recruit), by watching the romantic comedy Leap Year. It's one of my favorites. I just love Amy Adams--actually I kind of had her pictured in my mind looks-wise for Helen, the heroine in the almost-on-the-shelves The Saint :)
But in thinking about her character in Leap Year--which I love--I realized that she's one of those slightly snobby but sweet characters that is really hard to pull off in a novel. Kind of like Alicia Silverstone in Clueless. In a movie, I think it's a little easier to make that kind of a character likable. We get to SEE how cute Amy Adams is (or Alicia)--and they are both so darn cute!--that we as an audience can't help but like her. But I think it's harder to do in a book.
As I mentioned, I love this type of heroine. I took my stab with Caitrina Lamont in Highland Warrior. Whether I pulled it off, I guess, depends on the emails/reviews you read, LOL.
In my experience, both from reader email and the reviews, it seems to me that readers in general are much much less forgiving of a the heroine than they are of the hero. In books where I thought I might get some flack for the hero, it hasn't materialized, but if the heroine does anything unappealing or makes any bad choices, you can almost count on someone coming down on it. Part of me wonders if maybe it's because women (heroines) tend to react emotionally, which makes their actions/decisions easier to criticize. I'm not sure, just throwing it out there.
Gone with the Wind often appears on many readers' favorite romance lists--although I don't think it technically fits the definitely of genre romance (happy ending)--but I really can't see an author today being able to get away with a heroine like Scarlett O'Hara. Spoiled. Snobby. Manipulative. A little mean spirited (poor Sue Ellen!). Mercenary. I don't think most readers would tolerate this type of heroine. Yet, I love her, and I'd love to see a heroine like her. But I can almost hear the reviews and emails now, LOL.
Now take that type of character and make him a man and most readers will love him. Myself included. :)
So do you agree with me? Do you like the "difficult" heroine? Do you think readers are harder on heroines than they are on heroes? Do you do this yourself? (I think I do unconsciously).
Posted by Monica McCarty at 4:14 PM