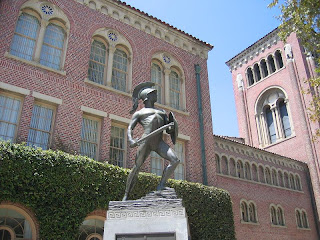 The Freshman Twenty at Forty
Like most college freshmen, I packed on a few pounds when I went away to school.  For undergrad I went to USC (University of Southern California--Tommy Trojan above) and not only did it have excellent food, it also had a valadine (sp?) program.  Basically, a charge card for food tied to the tuition bill.  Once I got over the novelty of being able to eat whatever and whenever I wanted, I dropped most of those pounds.  Not all, but most.
Other than for the times I was pregnant, freshman year was probably the biggest weight gain I've ever had.
Until now.
Flash forward twenty (cough, cough...or twenty plus) years and I am no longer that svelte eighteen year old, but a forty-one year old mother of two who seems to be adding weight every week.  I'm exaggerating, but it seems like the moment I hit 40 everything changed.  I've always worked out and eaten relatively healthy (my big weakness being burritos and cheese), but all of the sudden it caught up to me.  Granted with all my recent tight deadlines I've had too much butt in the chair time, but these pounds don't want to come off!
Calories in, calories out, should be simple.  Then why is it so HARD.
I thought I'd throw it to you guys and see if anyone has any diets that have worked for them.  Atkins is a little too scary for me.  Life without carbs?  Ick.
Posted by Monica McCarty at 6:03 PM 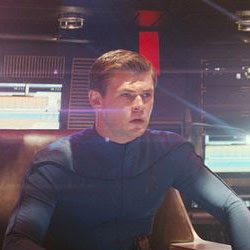 Captain Kirk had such a hot father, LOL.  I finally had a chance to see the new Star Trek movie last weekend and LOVED it.  Haven't enjoyed a movie that much in a long time.  The first five minutes (featuring George T. Kirk, James Kirk's father) was brilliant.  There are plenty of fun homages to the TV show, but you don't need to be a Trekie to enjoy this movie.  Hope some of you have had a chance to check it out.
I think I must be having a "blond" week because my other fascination this week has been TRUE BLOOD, the HBO series based on the Sookie Stakhouse novels.  Hubbster and I are catching up on the first season thanks to NETFLIX and we're loving it.  After reading the first book, I thought I would be a diehard Bill fan, but the actor who plays Eric really grew on me.  Actually he stood up out of his chair and I got a look at the tall, well-muscled bod (sickeningly shallow, I know).  I think I have the inspiration for the "viking" looking hero in book #2 of my new series, LOL.  How funny is this...he was rumored to be picked for the lead role in Kenneth Brannagh's upcoming "THOR," but instead the role went to . . . yep, the guy above who plays George Kirk. 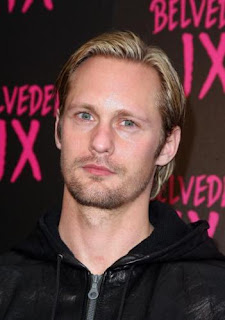 With my deadline for the first book in my new series looming, I might be a little quiet for a while.  That, and the monsters are getting out of school.  Any TRUE BLOOD or STAR TREK fans out there?
Posted by Monica McCarty at 10:45 AM