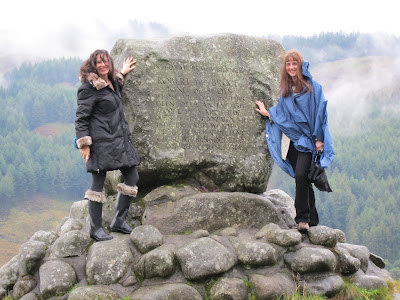 I'm back!
And except for a bad case of jet lag and the inevitable cold (why do I ALWAYS get sick when I travel?), I had an absolutely fabulous time.
It's hard to explain how exciting it is to see some of the places that I feel like I've come to know in my novels. Walking on the same ground as Bruce and his men did over seven hundred years ago and knowing that it hasn't changed much is pretty powerful and at times very moving. The above picture is a good example of this. That's me and Veronica at the Bruce stone which overlooks the battle site of Glen Trool (which you read about in THE HAWK). It was one of the two rain days that we had, but the weather only seemed to add to the experience--note those fingers of mist on the hill behind us. Pretty evocative. Here's a photo detailing the inscription on the stone. 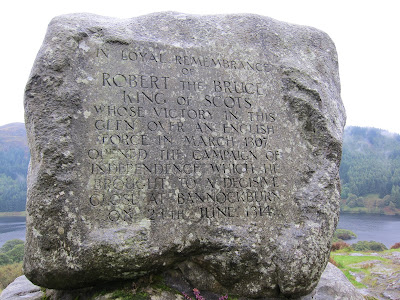 I'm so fortunate to have found the world's greatest traveling companion. Being able to share these moments with someone who totally gets it makes it even more special. A large part of our itinerary was devoted to the Bruce sites and places that I will be writing about in my novels, but we also visited some extreme coastlines and Aberdeen which focus in Veronica's upcoming YA Vampire series and her Clan MacAlpin Scottish historical series. We joke that she's the Isaac to my Julie MacCoy, because I love all the planning and she just goes with the flow.
When she mentioned that she wanted to see some dramatic coastlines I knew exactly where we had to go: Northern Scotland. Not only did we visit Dunnet Head (the most northerly point of the mainland), but we also visited Cape Wrath--the northwestern tip of the mainland and undoubtedly one of the most remote places you can travel in Britain. We were one of 2,500 people a year who take the ferry ride and then a 30 minute (at time terrifying) minibus drive over some of the most desolate countryside you will ever see to reach the lighthouse and cliffs of Cape Wrath. Surprisingly "wrath" doesn't refer to the fury of the wind and waves that strike the coastline, but is an old Viking word for turning point. The area is used by the British SAS (special forces) to train and is often closed to the public--for good reason as they drop bombs in the area! That's Veronica, our travel guide Fiona, and me on the cliffside. 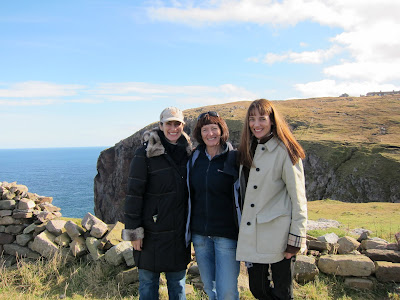 It's hard to capture the beauty of the place--or the danger--but this picture of some absolutely crazy (aka stupid) young tourist gives you an idea. I seriously thought the girl was going to fall off the cliff. If I'd been her mother I would have wrung her neck. 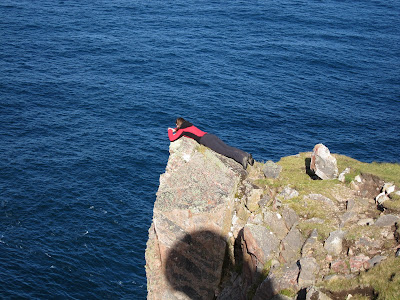 Anyway, I'll be posting many more pics from the trip over the next couple months on my website and flckr pages so be on the look out! Hope you all had a nice couple of weeks. Once I recover, it will be time for me to hit the keyboard again. Good news: three more Highland Guard novels will be on the way!
Posted by Monica McCarty at 8:26 AM