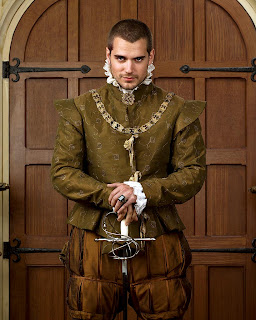 Okay, I'm a little late to the party, but better late than never, right? On my recent trip to Scotland (tired of hearing that yet?) I downloaded season one of THE TUDORS to watch on my ipod. OMG, so good. Episode one and I was hooked. Jonathan Rhys Meyers is yummy as is the guy who plays Charles Brandon (Henry Cavill pictured above). He just might be my new inspiration for my next hero. The costumes are fantastic. How could I have been missing this? So if you haven't had a chance to see it yet, check out showtime and watch an episode and/or add it to the Netflix queue.

Although the show is set about a century earlier than my Highlander series, it's good for setting the mood. I'm doing revisions for book #3 and adding an early court scene. I decided to reference one of my favorite songs from the period--Greensleeves--and wouldn't you know some nice person at You Tube has put together a video with scenes from the Tudors. So now, when you read that scene you'll know my inspiration!

Are you a Tudors fan? Any other costume dramas that I'm missing out on?