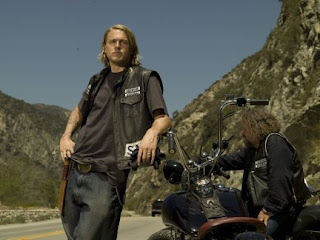 I read a glowing review in my local paper of a new show that debuted last night on FX called SONS OF ANARCHY and decided to give it a try. How's this for a byline: Hamlet on a Harley.
With a comparison to the Sopranos, it sounded like something I might like. If the first episode is any indication, it's going to be awesome (but not for the weak of stomach). Like the Sopranos and another FX favorite of mine RESCUE ME, the writers have done a great job in setting up another complex anti-hero in Jax. Jax is played by actor Charlie Hunnam (pictured above)--who goes into my category of one of those rare hot blonds, LOL. The audience is immediately drawn to him, but lest we get confused about what kind of guy he is there is a scene in the middle of the episode that won't let you forget.

I'm looking forward to the return of THE OFFICE later this month, but other than that I'm not all that excited about the Fall season. I'm still waiting for Battlestar Gallactica in January and LOST--I can't remember when that's supposed to be back.

What about you? Any fall shows you are excited about?
Posted by Monica McCarty at 9:21 AM