The End of Summer Already?

How is it possible that the kids are going back to school next week? Did this summer just zoom by or was it me "lost in time" writing? Months seem to go by before I stick my head up from its fixed position at the computer screen.

My deadline for book #3 is creeping up (as is my trip to Scotland...yea!) and I've had the nose to the grindstone so to speak. Not much to report on other than the news that the Fog City Divas blog has decided to call it quits. It was a difficult decision, but I think we had a great run. I'll be doing my last blog next Thursday (28th) and we'll be giving away prizes all week so I hope you guys will pop by and say "hi." Who knows, I may even have a signed set of new coverflats to give away. :)

And in the kind of fun department...I received a few copies of my first foreign versions of Highlander Untamed from Spain. Love it! 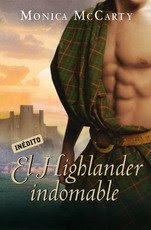 Posted by Monica McCarty at 6:44 PM