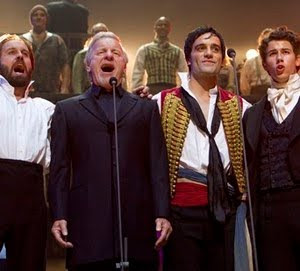 What's Your Sure Thing?
I happened to have PBS on Saturday morning and got sucked into watching a new version of Les Miserables--the Twenty-fifth Anniversary concert filmed at the O2 a few months ago. The picture is of two Valjeans (including the amazing Colm Wilkinson) and Nick Jonas as Marius. Who knew, but Nick (one of the Jonas brothers) started out on Broadway years ago playing the little boy Gavroche when he was only 9 years old! He was AWESOME.
Now to fully appreciate this story you have to know something about me--I'm a not so in the closet show tunes geek. I love musical theater, and Les Mis is right up there with Jesus Christ Superstar as my favorite. I've seen it at least a half-dozen times in the theater, and I own not one but two copies of the 10th Anniversary concert DVD (my kids were watching the other one so much I had to get my own, LOL). I told my kids if Broadway every calls, they'll have to fend for themselves. Since they've heard me sing, they aren't too worried.
There's one thing you can count on when I watch Les Mis. No matter how many times I watch it, I cry at two parts (when Fauntine dies and at the end when Valjean dies) EVERY time. It kills my husband. He thinks it's hilarious. It's not like I don't know what's coming. But it something about the lyrics and the voices, I don't know--it gets me.
There are a couple movies that are guaranteed tear-jerkers for me, too: The Notebook, Brian's Song, and Love Story.
It got me thinking about what drew me to romances. I love emotion. I love when an author can make my gut clench or make me care so much that I find myself crying along with the heroine when things *look* like they're not going to work out. Emotion is the magic for me. It doesn't happen very often, but when it does . . . that's my idea of a keeper. Judith McNaught was a master of this. Susan Elizabeth Phillips does it to me pretty often, too. Lisa Kleypas almost always makes my heart tug.
What about you? What are your "sure things?" Or are you not a crier?
Posted by Monica McCarty at 6:00 PM